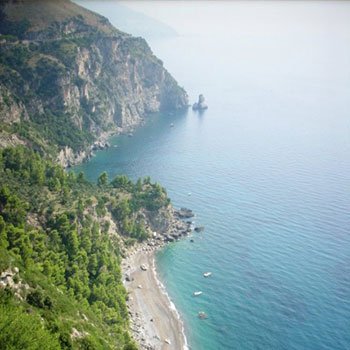 The beach Tordigliano is situated on the Amalfi coast a short distance from Positano, and is located in Tordigliano – Chiosse, in the territory of the municipality of Vico Equense. The beach, one of the largest of Sorrento and Amalfi Coasts, consists of 4 beaches including three smaller and a more extended one; Tordigliano extends for about 400 meters, and is also called “Marina Longa di Tordigliano”.

Once arrived on the beach which has a surface made mainly of pebbles and has crystal clear waters, from there you can admire a splendid panorama on the islets of Li Galli

Punta Campanella, is the extreme offshoot of the Sorrento peninsula and is located in the municipality of Massa Lubrense Termini fraction. Separated from the Island of Capri, it is dominated by Mount San Costanzo of 497 meters of altitude, which is part of the chain of Mons Lactarius, and is bordered to the east by the Bay of Jeranto.

The surrounding marine area is an integral part of protected marine reserve of Punta Campanella was established in 1997.

On the promontory of “Minerva Tower“, built by Robert of Anjou in 1335, and rebuilt in 1566. Tower had an alarm function in case of attacks by pirates and was part of a series of towers built along the Sorrento peninsula. In the tower was rang a bell in case of an alarm, and this is the origin of the name of Punta Campanella. 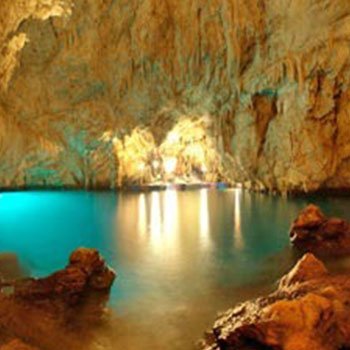 Grotta dello Smeraldo, litterally “Emerald Cave” is located 5 km from Amalfi, in the bay of Conca dei Marini. Discovered in 1932 by a local fisherman, the Grotta dello Smeraldo in Conca de ‘Marini owes its name to the particular color of the water that reflects the light that filters through the rocks that stretch of the Amalfi Coast, creating color effects by the amazing shades: from cobalt blue to turquoise to emerald green.

The Emerald Cave, which in antiquity was not invaded by water, is about 30 cm wide by 60 meters and 24 meters high at the highest points, and is full of columns, stalactites and stalagmites bizarre shapes, which create an enchanting environment . In its waters you can also enjoy an original and fascinating underwater crib, made of ceramics from Vietri sul Mare, located on the bottom of the cave is about 4 feet deep. 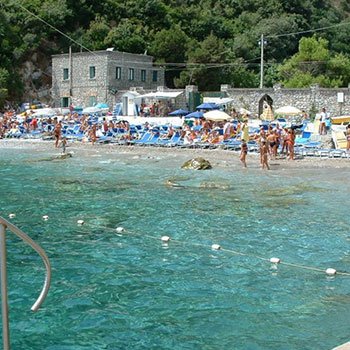 The Recommone beach overlooking the Gulf of Salerno and is situated between Marina del Cantone and Crapolla’s fjord; is well sheltered from westerly winds, and has a pebbly bottom in some places are so small as to be almost sand.

In the small creek Recommone, at sea level you will find many caves, including the Cave of Reccommone also known as Fisherman’s Grotto so called because often these were anchored there to rest in the shade. 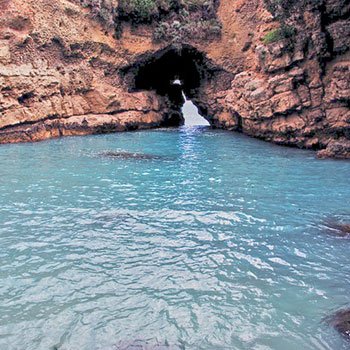 “Bagni della Regina Giovanna” is situated in on the Cape of Sorrento and take their name from Queen Joanna of Anjou, queen of Naples, which he used to swim in these waters.

You can still see the ruins of the Roman Villa of Pollio Felice, which once stood here.

The special thing about this place is the natural pool nestled among the rocks and connected to the open sea by a bow, also natural. This is a place with crystal clear waters and calm where you can stop for a swim in peace; just as centuries ago, the Regina Giovanna usually did. 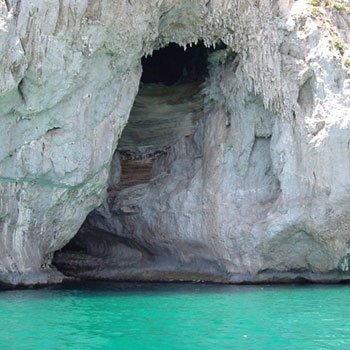 The Green Cave, formerly known as the cave of the Turks, is situated on the southern side of the island of Capri, and is known for the color of the water in its interior that, owing to natural lighting, it changes to green. Known since the sixteenth century, during which the island was repeatedly subjected to attacks, including the pirate Dragut and the corsair Khayr al-Din, called Barbarossa, who destroyed the castle of the same name, the cave was used as a hideout by the pirates enemies that lurked inside the cavity with their ships to plunder the boats passing by surprise.

The cavity has two openings, called conventionally thresholds (underwater thresholds if submerged); the western one is located four meters below sea level, while the eastern one is at sea level and is seven meters high. The main feature of the cave is, however, the intense emerald green coloring taken from the sea to its interno. 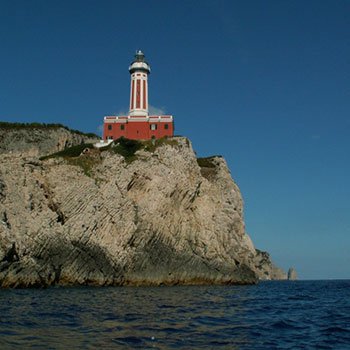 The area of Punta Carena’s Lighthouse is located on the west side of the island and is one of the most popular resorts on the island. The area is dominated by a large lighthouse, according to Italy for importance and power of lighting, located on a stretch of coast that is called Punta Carena for its resemblance to the hull of a ship.

The lighthouse has been active since 1867. Its construction started in 1862 and designed by engineers Bourbon.

In the summer months the area of Punta Carena lighthouse is bathed in sunshine from dawn until dusk, and for this reason its terraces are preferred by sunbathers.

The White Grotto  is located on Capri Island. It derives its name from white incrustations of calcareous matter upon its sides, and from clusters of white stalactites which hang from the roof and fringe the entrance.

The cave faces east, and is situated near the Punta della Chiavioa. The entry, about 70–80 feet  high, leads into upper and lower caves, of which the former is not easily accessible. The lower cave can be entered by boat for a short distance. Unlike most other caves at the water-level, it is much broader at approximately 6 feet above the water than actually at the surface. The total height is no more than 24 feet.

The upper erosion line is clearly marked near the cave and within it. The upper cave seems to belong to an earlier period.